Despard switch plates, also known as interchangeable (IC) or stacked switch plates offer flexibility in tight spaces by allowing for up to three switches in a single gang location. Popular in older homes, these plates can be used to cover small Despard sideways toggle switches, outlets and pilot lights that are secured using a metal mounting strap. 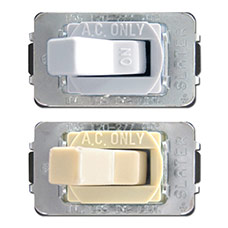 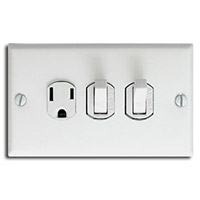 Your Sierra light switches and plugs may be mounted horizontally or vertically. 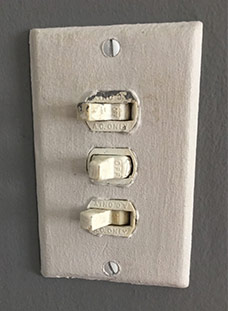 Here, you can see another style of Despard switch.

The center switch (which is thicker than the others) is a Despard Eagle toggle switch. It fits the same opening as the other ones, and new replacement cover plates can be purchased above.

For switches that sit horizontally, you will need a horizontal mounting strap. This single strap is used to mount a single switch (in the center opening), 2 switches (1 at top, 1 at bottom - as shown below) or 3 switches (1 in each opening).

Note how these devices fit into the mounting strap to line up with the despard switch plate openings. 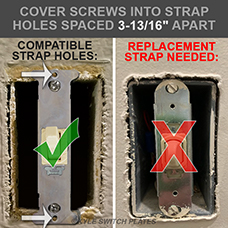 The metal strap holding the switch must have the screw holes spaced 3-13/16" apart for the cover plates to screw into place.

If you have a different strap holding a single vertical switch, get the new compatible strap.

In the image here, you can see that the base around the sidesways toggle switches is much smaller on a despard switch and at its widest point it is under 1".Each despard switch is sold individually and needs a mounting strap to hold it into the plate (above image).

Horizontal toggle switches have a larger base that is greater than 1" at it's widest point. They come as a unit (with 2 switches) that screws directly into the electrical box without additional mounting hardware. 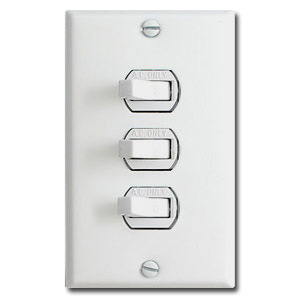 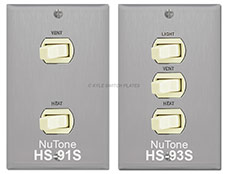 Looking for new NuTone plates for the lights, vent and heat in your bathroom?

We cary plain covers in 13 finishes.

Note: the new, updated covers are not imprinted with labels. Get labels here.

Other Examples of Switches for Despard Plates (Some Discontinued)

There are a variety of older styles of light switches that fit despard covers. See photo examples below.

Many of those shown have been discontinued. Links are provided by images that have replacements.

The switches are momentary in action, much like a doorbell switch. These bell push switches were part of the original release of Pass & Seymour's Despard line.

Offered before low voltage switching systems were designed, an “Insulating Adapter” (which snapped in place between Despard devices) was required when mix-and-matching low and high voltage Despard devices.

The switches are near identical to Pass & Seymour's Bell Push buttons. It is necessary to isolate the bell push when mix-and-matching low and high voltage Despard devices. 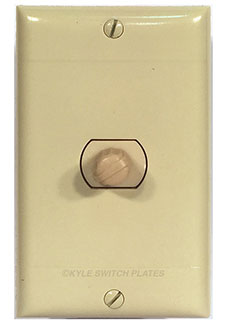 Pass & Seymour Roto-Glo rotary action switch. Works by rotating the switch knob a quarter-of-a-turn for on or off.

The knob of the Roto-Glo switch is made with a special phosphorescent material which glows in the dark. 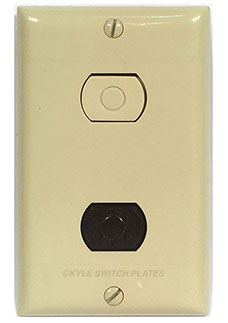 Pass & Seymour, Leviton and Eagle all made blank inserts like these.

The center portion of the blank insert could be knocked out to provide an opening for running a wire if desired. 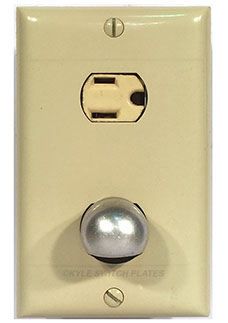 Both Pass & Seymour and Arrow-Hart-Hegeman made night light Despard devices.

The night light uses a standard Small-Base S6 6 watt bulb (small tapered bulb with candelabra base) which extends out beyond the switch plate. A special hood reflector screws on special threading and directs the beam of light to the floor.

The light could also be installed in the top position to illuminate lower switches or outlets. 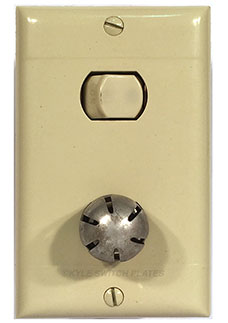 Available in the mid 1950s, Rocker-Glo switches were offered in single pole and 3-way configurations.

Rocker-Glo switches rocked back-and-forth for on and off. They were made with a special phosphorescent material which glows in the dark.

The incandescent pilot light (made by both Pass & Seymour and Arrow-Hart-Hegeman) is nearly identical to the night light shown in an example above; the only difference being the style of the hood reflector. 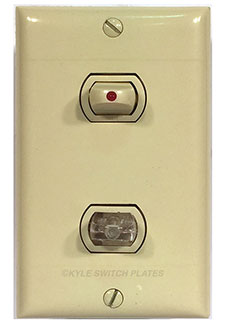 The upper switch is identical to the 1091 thumb switch currently still in production, however it has a pilot light built in for status indication of the relay.

The lower switch is identical to the 1091 thumb switch currently still in production, however the thumb portion of the switch is made from a clear plastic (and has an LED encased in it). This switch functions as a locator-lighted switch; the switch will illuminate for visibility in a darkened room.

Both the 1091 pilot-light and locator-light switches have not been in production since the mid 1990s. 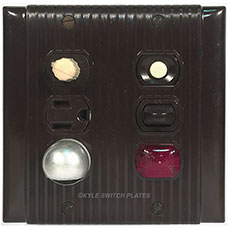 This picture demonstrates the versatility of the Despard system.

Installed in this 2-gang plate from upper left to lower right: 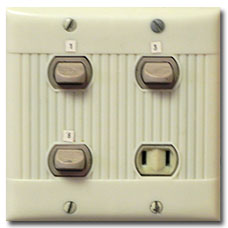 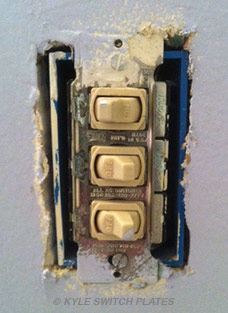 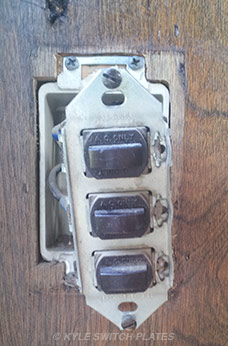